After years of conflict and delays, New Jersey’s medical marijuana patients will soon have access to their medicine. This week, the first pot dispensary in the state opened its doors in Montclair. According to the Star-Ledger, the Greenleaf Compassion Center is taking their first customers.

By law, medical marijuana patients will be allowed to purchase up to 2 ounces of medicine per month. But, at least for now, the sole dispensary will be limiting purchases to a half-ounce in order to ensure their supply can “stretch” to all of those who need it. 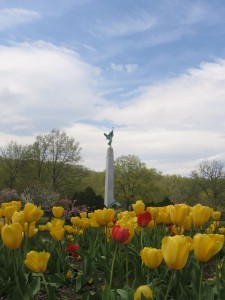 It’s “an incredible and historic moment for some of the most seriously ill patients” in New Jersey, said Roseanne Scotti of the New Jersey Drug Policy Alliance. And Greenleaf personnel say they are “extremely excited” to open their doors and assist medical marijuana patients.

So far only 338 patients have been registered statewide, eligible for medical marijuana use. As of early this week, 20 of them had made appointments at Greenleaf. They are being called in to fill their orders in the order that the state issued their id cards.

Despite medical marijuana legislation being passed several years ago, it was held up over rules and regulations. Governor Christie, and others, didn’t want a free-for-all, apparently envisioning pot-patients having too much freedom and dispensaries operating on an open-door police. Subsequently, New Jersey has some of the toughest medical marijuana laws of all.

At the dispensary, Greenleaf staff will discuss medical history with patients and how particular strains of marijuana may help ease their symptoms. Patients are required to pay cash and if they can demonstrate they are low-income, they could be eligible for a discount. Greenleaf won’t say how much they are charging because of program rules that bar them from advertising.

While the dispensary is a big step in the right direction, the state will need more than one. And as Assemblyman Reed Gusciora says, “The program will only be successful if all patients throughout our state have reasonable access to this treatment.”

If you are ill and you believe you should be able to use medical marijuana, the state will not recognize your need until you go through the process of registration. Until you have an id card and marijuana from a state-approved dispensary, you are breaking state law.

If you are charged with a marijuana offense, contact our offices today. You have rights. We can discuss your legal options and how we might be able to help.