Many states across the country join New Jersey in having introduced laws trying to prevent intimidation, harassment, and 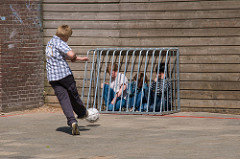 bullying in their schools and districts. Anti-bullying laws are written to minimize violence at school.

The New Jersey law specifically requires schools to create policies to prevent bullying, as well as training for faculty, as how to police behavior that may lead to bullying. Students who violate anti-bullying provisions can be suspended and face possible expulsion; and the school district may face huge fines from civil liability claims.

Examples of bullying include:

The crime of cyber-bullying is truly a terroristic act that can have huge consequences, and even lead to deaths of innocent kids. What often starts as an “innocent” prank on an unpopular peer often turns into a nightmare for the harassed and ridiculed child, as well as his or her parents.

The bullying begins in the hallways at school, which should be safe havens of education, and simply doesn’t stop. With the technology of instant messaging, Facebook, Twitter, email, texting and other social media outlets, bullies have stalked into the cyber world to give their victims no place to hide.

Teens and even twenty-something, college-age adults have no escape from the bullying. College campuses are still notorious for frat house initiation stunts that are organized by outright social predators.

Tyler Clementi was one out of thousands of victims of cyber crime that had no choice in what ended up being his undoing.

New Jersey anti-bullying laws are tough for a reason. Bullying and Cyber-Bullying are crimes against humanity. It’s hard enough growing up in this world without the constant harassment from a disturbed classmate, or “friend”.

All state anti-bullying laws include penalties of at least one, or all three of the following:

School districts, including those in New Jersey, may face monetary fines, arising out of its failure to prevent or punish certain types of behavior by students within their district.