Bail is not a form of punishment, nor is it designed to reflect the presence of guilt. Instead, bail exists to ensure a defendant returns for future court dates. It’s an incentive to come back. However, a recent study from the Drug Policy Alliance (pdf) puts New Jersey bail practices to task and indicates the state may need some significant changes to ensure they aren’t creating a pauper’s prison. 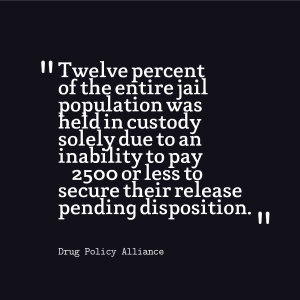 Bail is set according to your flight risk and your means. It should be set high enough so that you have incentive to return to court, but not so high that it’s unachievable. Unfortunately, courts seem to be setting bail amounts with little attention being paid to a defendant’s means.

To a well-off or even lower-middle class offender, a $2,000 bail is very doable. For someone without a job or living well below the poverty line (as many criminal defendants are), $2,000 might as well be $2 million. In other words, it’s unachievable. So, this person remains in jail until their next court date, and often the next one after that, and so on.

The problem with this is several-fold. First off, we are punishing the poor more severely than the rich. If justice is only accessible to those with money, what does that say about our justice system? That it is not just at all.

Secondly, we are spending thousands and thousands of dollars to hold people in jail for offenses that are really not that serious. These crimes which warrant a $2,000 bail, for instance, are nonviolent drug crimes or breaches of the peace (disorderly conduct, etc.). They are hardly worth spending several days let alone several months in jail.

The Drug Policy Alliance says in their report that they are recommending legislation to overhaul the New Jersey bail system. Among other things, they would like to see alternatives to cash bail, similar to what is done in the federal system. Things like supervised release or ankle monitoring can be just as, if not more, effective than a cash bail anyways—and they cost far less.

When 40{74bbbd36a4df8b83bd1805c8c4f34bcc3063e84848f392c2fd8bb03fcdaa883e} of jail inmates are there because they are poor, there is a major problem in the system. And until this is remedied, taxpayers will go on footing the bill for poor people to be criminalized.

If you are accused of any offense, a nonviolent drug charge or even a serious felony, we may be able to help. Contact our offices today for a consultation on your case.