When you want to file a complaint against the police, you unfortunately have to call the police. But the American Civil Liberties Union (ACLU) cautions that police departments across New Jersey may be giving complaining citizens incorrect information, potentially resulting in complaints never being addressed at all.

According to Philly.com, the ACLU released findings of a 2012 survey this week in which they asked nearly 500 N.J. police departments about their handling of complaints. Specifically, it asked five questions on the bare basics of complaint filing. Only a handful answered all five questions correctly.  About 75{74bbbd36a4df8b83bd1805c8c4f34bcc3063e84848f392c2fd8bb03fcdaa883e} didn’t.

“It absolutely is indicative of a bigger problem,” said ACLU policy lawyer Alexander Shalom. “The law is pretty clear. If there is enough information to investigate, they must do an investigation.” 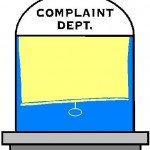 Among the incorrect responses, some departments informed citizens that they cannot make anonymous complaints, that any child complaining must have a parent present, that reports had to be made in person, or that immigration officials would be notified about undocumented people making complaints—all of which are false.

What happens when a citizen is dissuaded from complaining or sees that their complaint goes nowhere? They stop complaining, at least to the department involved.

In one case, four officers were convicted of planting drugs on suspects. As a result of their actions 200 people have had their charges dropped and the city has settled with 88 wrongfully jailed people for about $3.5 million. The ACLU says the problem could have been solved much quicker and cost much less if complaints that came in about the officers had been taken seriously.

The state Attorney General’s Office responded to the report by telling police chiefs to revisit training and procedures with staff tasked with taking complaints. But police officials say it’s not as bad as the ACLU makes it look.

“I know for sure we’ve gotten a lot better,” said Pennsauken Police Chief John Coffee. He points to one case where an officer was involved in an off-duty bar fight. A citizen complained and after a period of investigation, the officer was eventually fired.

Still, citizens and their attorneys know, it doesn’t always workout that way.

“They try to dissuade you from filing complaints,” said one attorney. “I learned this through my clients.”

It’s not surprising that the police don’t want to take complaints—no one wants to look bad. But, perhaps it would be easier if the police weren’t the ones policing themselves.

If you are facing any criminal charges in the state of New Jersey, you need someone on your side that will listen to your version of events and advocate for the best results possible in court. Whether you are accused of a drug crime or a violent assault, we may be able to help.