“We as Americans are taught when accused we have a right to a trial, but in reality the system does everything it can to prevent a citizen from going to trial. The Goliath of government is always bullying citizens into plea bargains etc. or dismissing the case after destroying the citizen’s life. I’m different. I want a trial.” 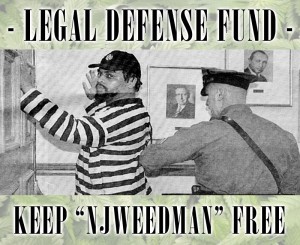 This wasn’t a statement from someone running for office or a man facing life-and-death criminal charges. No, these are the words of the NJWeedman, whom we’ve blogged about before.

Ed Forchion, who has coined himself as the NJWeedman, will be returning from California to Burlington County to face another trial in his marijuana distribution charges from 2010.

While he was originally charged with two offenses – distribution, and a less serious one – he was acquitted of the distribution and a mistrial was declared when the jury couldn’t reach a unanimous decision on the other charge.

The attorney who assisted him on his case (Forchion chose to represent himself) filed a motion to acquit following the mistrial. Forchion, however, opposed the motion and sought a new trial. Now, he is set to receive his trial, following a Superior Court judge’s denial of the motion for acquittal.

Though the NJWeedman was unable to make it to court this week when judge Charles Delehey denied the acquittal, he spoke by phone with the Burlington County Times and said he was happy with the decision and ready for trial.

The judge voiced his displeasure with some of the pre-hearing tactics of Forchion and friends, who decorated cars with literature on jury nullification and had a conversation with the press in earshot of a jury member in his first trial.

But, Forchion seems to know what he wants, and it isn’t just to put the case behind him, but bring attention to his plight and exercise his rights within the system.

In his first trial, he was banned from presenting evidence about the New Jersey medical marijuana law. The N.J. law does not recognize medical marijuana users who have been approved in other states but not here.

If you are accused of a marijuana crime in the state of New Jersey, I may be able to help. Whether it’s something as simple as possession or a serious distribution offense, you need the help of a local defense attorney on your side. Contact me today for a consultation on your case.