A 19-year old man alleges Jersey City cops used excessive force with him, and the NAACP is joining forces to ensure his story is heard. At a NAACP meeting, Jarrett Blair shared his story with organization members and the press. 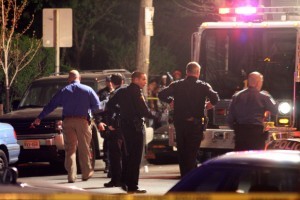 According to his account, Blair and some friends were walking near Culver Avenue and Kennedy Blvd. on January 19 around 2 a.m. They were approached by officers who told them to go home. The group continued walking towards Blair’s home. But apparently, the police didn’t think they were walking quickly enough.

Blair said officers began pushing them. When he turned to tell the officers that they were being abusive, he was hit in the face with a nightstick.

Blair suffered a concussion and a cut over his right eye that required 12 stitches to close.

“This happens too often in our community and I’m not going to let them beat my son,” said Blair’s mother to the NAACP members. “A blow to his head like this could have taken my son’s life.”

Police Chief Thomas Comey said the matter is under investigation, noting that Blair’s version of events and the officers’ versions differ dramatically. However, he refused to release the related police reports, citing the ongoing investigation.

“We investigate any allegation of police misconduct,” Comey stated.

Allegations like this often get no media attention. The NAACP says it’s their desire that their assistance will help shed light on this case and potentially others like it.

“We have decided to bring (this allegation) to the public’s attention and hope that it can be adjudicated fairly,” said local NAACP leader William Braker, adding that it’s likely the case will end up in court.

The problem with allegations of police brutality or excessive force is that6 they end up as a you vs. them situation. And when the “them” is law enforcement, many citizens feel that they don’t have a foot to stand on.

Whether you are charged with disorderly conduct or even assault on an officer, we may be able to help.